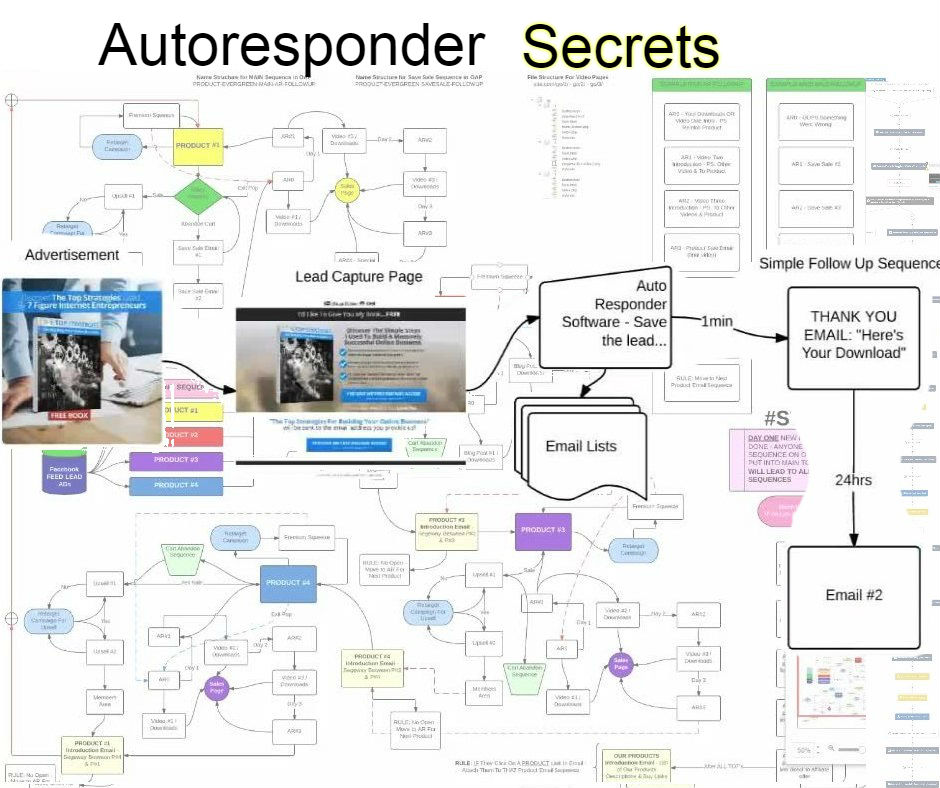 Sometimes we’re going down a specific path in life and we’re thrown a curve ball. Some quiver up into a ball, get really worried and don’t know what to do and end up half-assing what they’re doing or don’t do it at all.

Then there are others who also get thrown curve balls but look at them differently. They look at them as an opportunity to divert from the path they were on and end up finding something even better for their lives.

For those of you that missed getting the funnel, the access will be opened one last time because it is the holiday season when people are traveling and it can be hard to get on a webinar every single week.

Anthony was thrown a curve ball and got a cold for Christmas but we’ve got to keep moving forward because 2017 is next week. With Anthony’s voice out of action Sean Vosler joins us to talk about autoresponders because he knows them just as well if not better than Anthony. 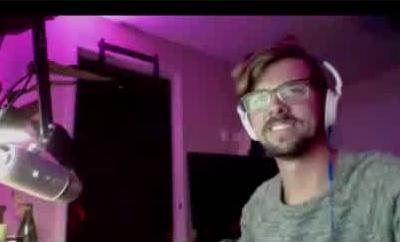 Sean does joint venture brokering and is responsible for 20 million dollars in sales this year using autoresponders to sell products for the biggest brands. He’s one of the most successful email copywriters out there who also builds autoresponders. He connects interesting people with great products to promote with other people that have great distribution lists.

The challenge is to take a crazy complicated funnel and break it down in a way for someone just getting started. To teach the foundational concepts so you can start making sales.

If you build a complicated funnel it’s a headache because there are always going to be things that don’t work right be it a technical issue or the content just doesn’t match the audience. It’s better to build super simple funnels and focus on the email follow-up.

All of his promotions are built on some very basic concepts. You can have the best marketing funnel in the world but if your audience doesn’t get to know like and trust you, it counts for nothing.

Our goal is to cater to great customers by giving real value.

Perhaps you’re looking to sell affiliate products and want to build a funnel but some of the pieces are missing so this should bridge the gap and give you a more complete picture:

This will focus on the 1’s but even if you’re a top-of-the-line marketer you’ll still get some ideas that will expand your funnel and increase your conversions. The training is designed to go from super basic all the way to helping clients make thousands of dollars every day.

What is an Autoresponder

An autoresponder is a marketing tool used to communicate with real people as you create a tribe. It’s important to understand the tech side of things but the goal is to create a lifelong connection using email.

These are some common mistakes many beginners make which may work in the short-term but ultimately lead to failure:

Autoresponders don’t have to be complex to be powerful. When you’re ready to scale your business you can add more bells and whistles.

One promotion did 1.2 million dollars in sales this year. It took about 3 and a 1/2 hours to build a funnel, write a few emails and knock up a landing page. You don’t have to create your own product when you can be an affiliate for someone else’s.

People instinctively look for reasons not to believe what you are saying because we don’t like to change. So the number one rule in marketing and advertising is to teach people why your product is worth buying to overcome their objections.

Even though you won’t be replying to all of your emails you need to be listening to what people are saying so it is a two-way conversation.

We all want to sell products but there needs to be a balance between content and product promotions because we don’t want to alienate our subscribers by being a pushy salesperson. Consumers are becoming smarter and they can sense online sales tricks so our emails need to be a conversation, pretend you’re writing a letter.

Even though you may be selling someone else’s product your emails represent yourself so you need to be authentic and transparent.

All we need is a tool that can send an email based on an action like Clickfunnels, SendLane or GetResponse. This is an ActiveCampaign autoresponder sequence for a webinar: 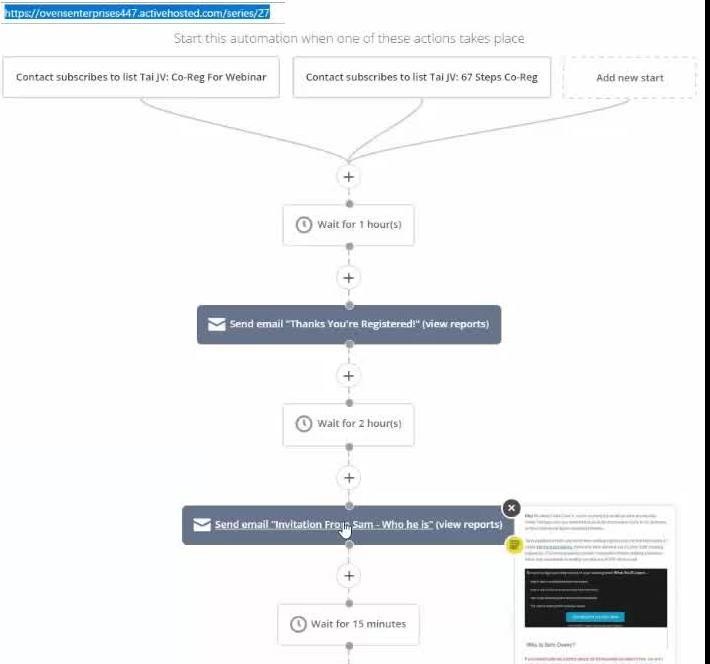 None of the autoresponder services like the old affiliate marketing model where you found a product then emailed the offer to a thousand people. That does work but our goal is to build a relationship so we can sell today, next week and into the future.

The really cool thing about this sequence is regardless of what product you’re selling it’s mainly about your story, your audience’s story and the product is just icing on the cake. This technique works!

The way we do that is to create emails that are rooted in content rather than selling, it’s just different to the other 99% of affiliate marketers. 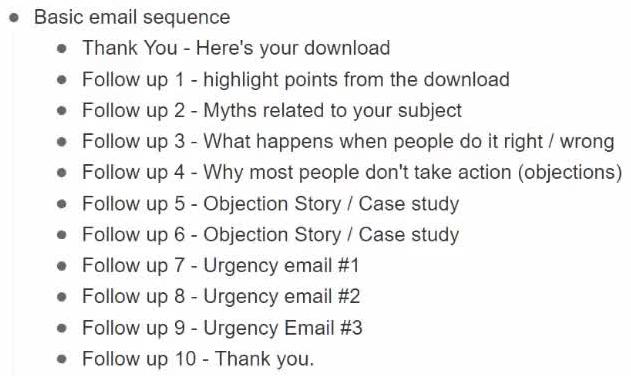 The sequence always starts with giving away something for free like a book, a guide, a webinar or a video. The first thank you email provides a download link and reiterates the benefits they are going to receive.

If you are selling an affiliate product you want your book to be on a complimentary topic. The thank you page is all about bridging the gap between the freemium and the product you’re selling, so you could say something like:

Thank you so much for opting in to get the free guide. You’ll find the download link attached to this email.

I’m really excited that you’ve decided to join our list and I think you’ll get a lot of value from the book.

This is calling people out on a habit we’re all guilty of and they’ll really appreciate it. We’re creating an empathetic connection telling them that we are just like them.

Usually affiliate products have a good video sales letter (VSL) that teaches about the product so we can include that as a soft sell right in the thank you email. We’re not listing the benefits and features of the product we’re just saying they are interested in the subject and we found this cool training video that they should check out.

People are probably not going to buy on day one and that’s where your sequence comes in.

The sequence doesn’t have to be 10 emails but if they haven’t bought by then 10th one then you should probably just be sending content.

The first six follow ups are soft selling, the aim is to develop a relationship and build trust by teaching concepts and telling stories. If we build trust now then try and sell something later then they’re going to be much more inclined to listen to us. It’s all based on the premise you believe in what you’re selling.

This is where you highlight sections of the download because most people are not going to read it. You can literally copy some points from the book and pop them in this email then explain why they are important.

The reason for doing this is because the best salespeople in the world are teachers or guides, someone that knows what they’re talking about and is teaching you right from wrong. So it’s a good idea to learn about the product you’re selling.

If you’re trying to sell a product you know nothing about then you’re going to have a hard time teaching anything about it. You don’t need to be an expert but you do need to know more than the person you’re selling to and you shouldn’t sell something you don’t believe in.

You’re building a value based relationship instead of hard selling. Usually the emails cover a concept by telling a story like the value you get from investing in knowledge.

A lot of people are afraid to give away their secret sauce but don’t be scared to write long emails that give real valuable content. Teaching builds trust but most people don’t want to do what you teach, they want to buy something that will help them do it.

We all have certain beliefs in our mind that aren’t true but we take them as fact. In this email you want to identify those myths then teach the truth about them. If you want to build an online business a myth might be:

The beauty is your answers don’t have to be your own, you can find a quote from a reputable source and build on it. Now your answer carries authority.

Follow Up 3 – What Happens When It Goes Wrong / Right

Take people on an imagination journey.

Don’t go crazy and say all of your dreams will come true or you’ll make $1 million tomorrow. People are going to be skeptical so show them other people that are succeeding.

Most of the time we’re not selling the product itself but the concept of the product. For example you might be selling an autoresponder but you still need to convince people of the concept that it’s worth building a business online.

Identify the pain points that are preventing people from taking action. What’s holding them back from implementing what your guide is teaching. It could be:

Then give them the answers to overcome their obstacles.

Sometimes you just need to call people out and disqualify them.

Hopefully the product you’re selling has case studies that you can draw from. What hangups did they face and how did they get over them.

If you can get these concepts and do them correctly then it will change your life, you’ll be able to sell things like how to build a business online. Imagine you’re at a bar and you’re trying to convince someone that they should do something better with their life, how would you do that. These emails are the same thing.

Pretend you’re writing a letter to your partner or a friend because you should be willing to sell products to your friends.

These emails use a negotiation tactic called taking away the option. You’re basically saying:

Are you going to buy it or not because this is your last chance.
It won’t be available tomorrow.

We’re telling people that are sitting on the fence to take action or they miss out. If everything about the product makes sense to them then perhaps the only thing they need to take action is a bit of urgency.

It’s worth showing appreciation for the time they spend reading these emails. Try this subject line:

What Each Email Needs To Contain

The follow up sequence is really one big story. Our visitor is the hero coming to our page on an adventure looking for something they’re lacking and we are their guide.

It’s the oldest story in history, someone has a problem and someone else helps them solve it.

Try to include each of the following elements in all of your emails:

If you can harness the power of this stuff it’s incredibly powerful.

Make 2107 Your Most Profitable Year yet. 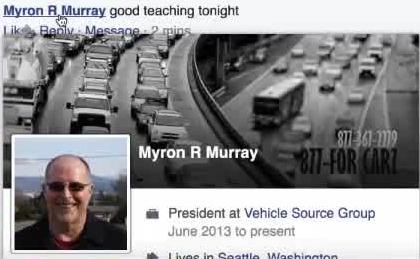 Patricia Huff won $100 from the group. 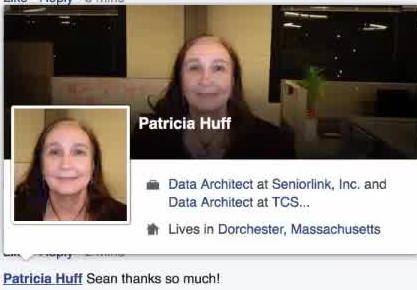