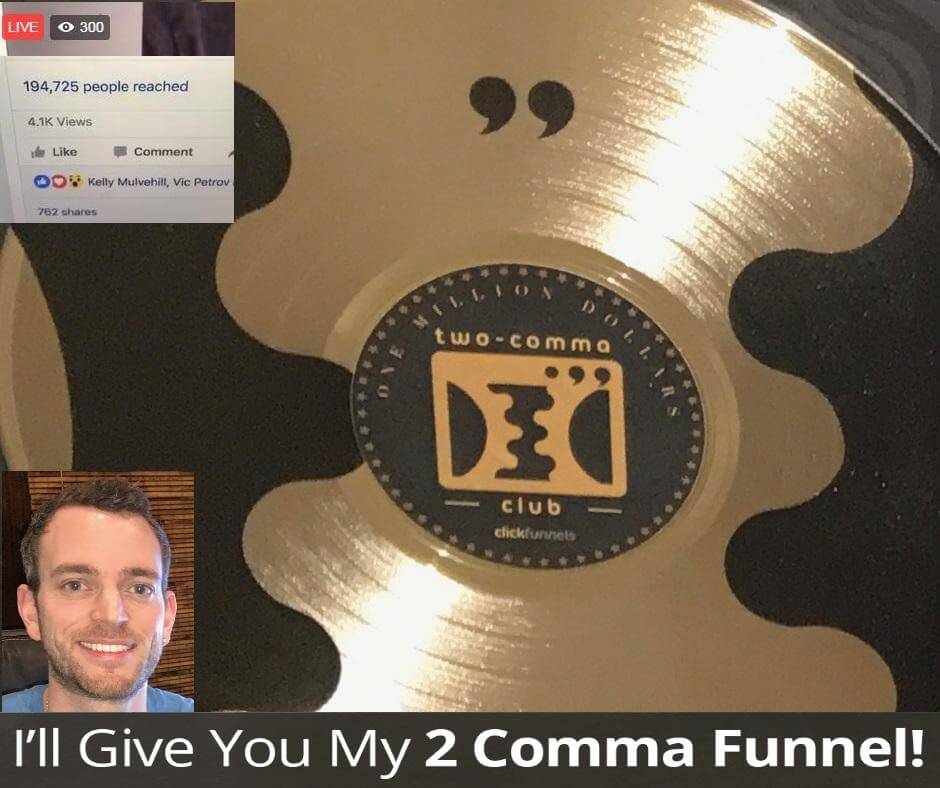 This week we get access to last weeks funnel again plus a 14 day series of emails and creatives to advertise on Facebook, generate traffic, get leads, subscribers and make money.

These are the two landing pages in Clickfunnels.

The first thing you need to do is make sure the video does not auto play and the controls are visible because those are Facebook rules. Just click [Edit Page], edit the video and switch auto play to “off” and controls to “on”. 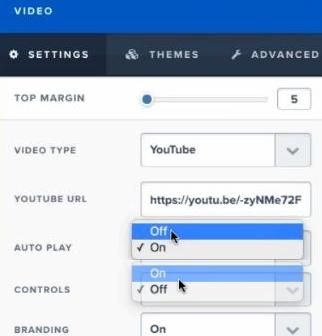 There are two landing pages allowing you to split test them. This is the first landing page which has a video. 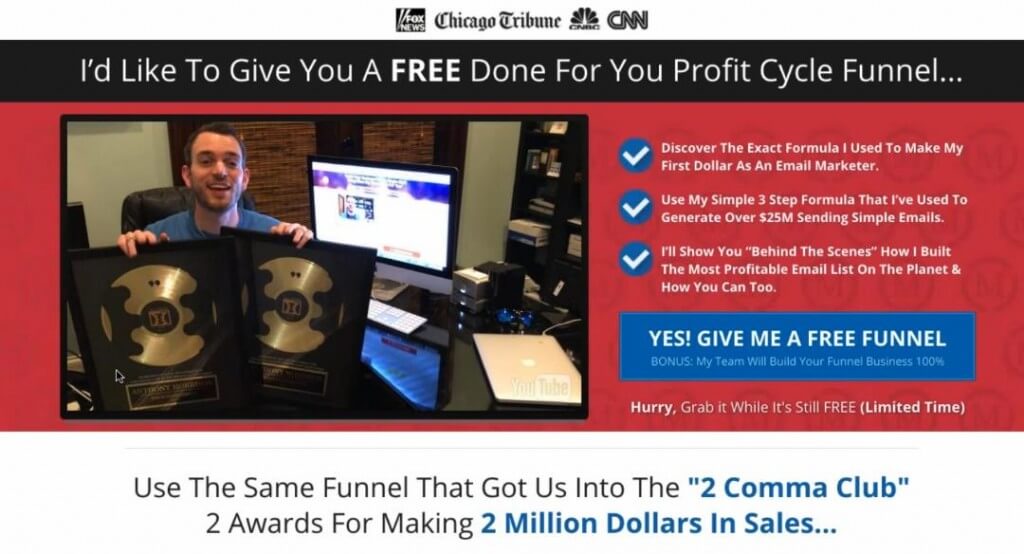 This is the second landing page which looks like it will play a video but it opens the opt in page. 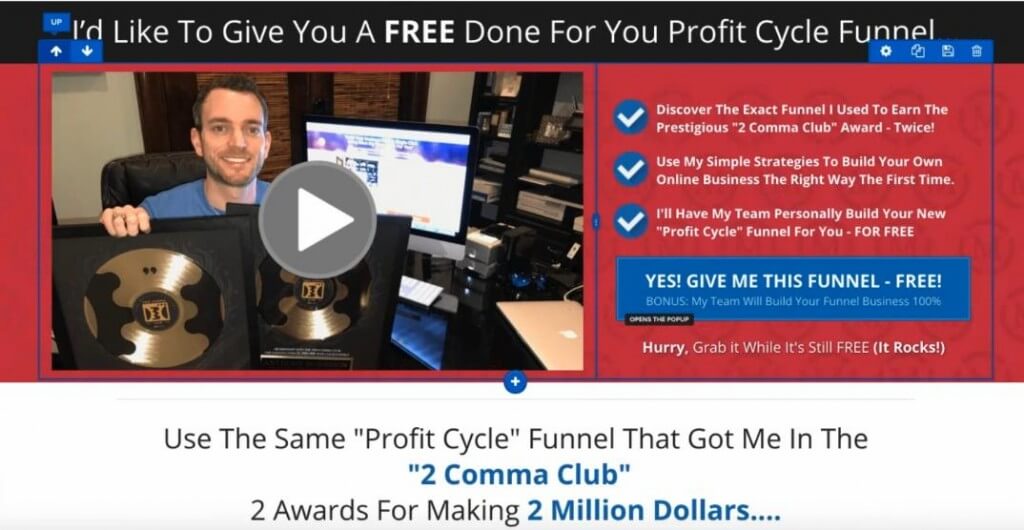 This is what the opt in page looks like. 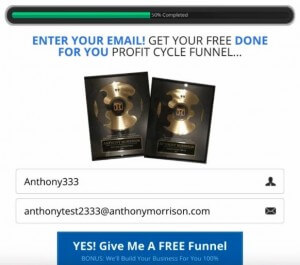 This is the thank you page. 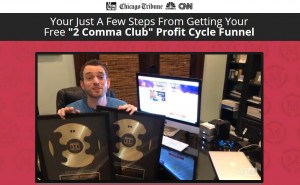 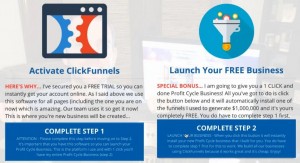 You do not need to disable auto play or show controls on the thank you page. 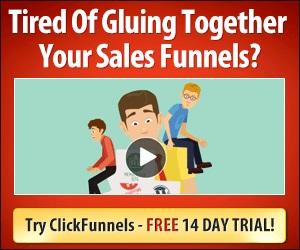 Step 2 gives people a complete funnel designed by Anthony which he is giving us permission to give away.

The funnel they get for free has a free eBook and is about marketing. Do you think if they can launch an entire business in 20 minutes that they will cancel Clickfunnels; probably not! That’s the thinking behind giving them an entire funnel. 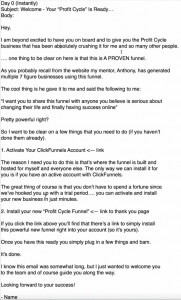 This email is sent as soon as someone subscribes. The very first paragraph builds credibility by saying this is a proven funnel crushing it for many people.

The email goes on to smoothly make a transition that the emails are not coming from Anthony but from you. Anthony passed the torch to us and we are now passing it on to others.

We then go on to tell them that they must activate their Clickfunnels account in order to install the funnel. It has a free 14 day trial period.

The second thing they need to do is install the funnel. The second link in the email takes them to the thank you page so even if they haven’t got Clickfunnels yet they’ll get another reminder to go and get it.

This is a powerful email:

It’s very important that people see that first email so we use a powerful [resending] technique which basically sends the first email again. 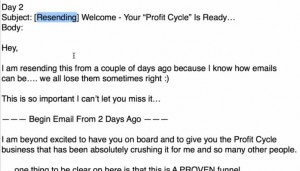 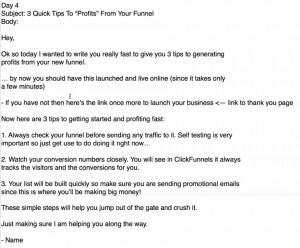 This email talks with the assumption that people have got their Clickfunnels account and set up their funnel business. This is the assumed sale.

We are setting the expectation that setting up their funnel does not take a long time. This email plants the seed that Clickfunnels can be used to monitor their statistics, the health of their business.

This email is building goodwill by teaching somebody these three simple tips that will help them along the way. It’s showing them that we are serious about getting them started so if they were sceptical they may now take action.

We’re knocking down walls, helping people over the hump to jump off the fence and take action. 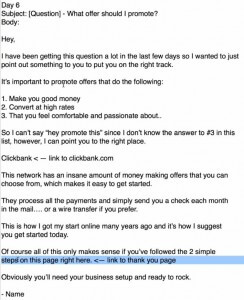 As people read this email they will think there’s a lot of people doing this with similar questions. If they aren’t doing this then they’ll feel left out and nobody wants to feel left behind.

We’ve given them links to profit centers, a network that makes them money. The hope is that they will go ClickBank, have a look around and see people like getting paid 50% and $42 or whatever.

When they come back to this email they see how people are getting wired money, they can do something that they’re passionate about but it only makes sense if they to take these simple steps. This email teaches where to make money as well as slipping in another link to Clickfunnels.

If you have a big list you don’t know who has already bought Clickfunnels and you have a lot of people that haven’t. When you craft these emails you need to give value to those already converted so they don’t feel they’re being sold the same thing.

Someone that already has Clickfunnels is also getting value by learning about ClickBank. 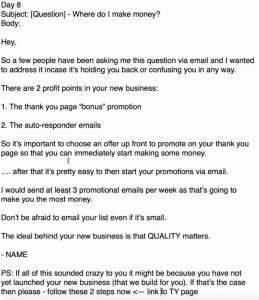 One of your goals should be to learn how to write these emails for yourself.

The question of where to make money will appeal to most people so telling them where the profit points are is important.

This email excites both groups of people, those that have Clickfunnels and those that haven’t taken action yet because it is also teaching. You don’t need a big list, and you don’t have to send emails every day. 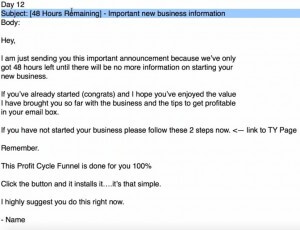 The first five emails just gave value but on day 12 and 14 it’s all about dropping the pitch for people that haven’t bought yet. They have had four days to digest the other emails but now it’s time to introduce some scarcity so they take action.

You’re telling people if they haven’t done it by now they’re probably going to miss out and they won’t be able to do it.

The tone of the email has changed. We’re no longer giving tips and teaching but we’re saying hey you’ve gotta do this now.

Some people on your list need that scarcity before they take action.

Good value has been given to people that bought and the analytical people that may have questions. No you’ve got to address people that won’t take action unless they feel some scarcity. 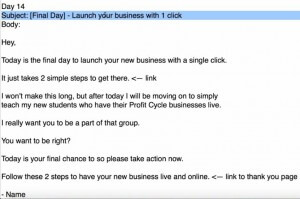 Day 14 is short with 2 thank you page links. This is a little more salesy a little more hype because it’s the last shot to sell, to have people take action.

At the end of the day if these emails don’t convert then you’re not gonna make a lot of money. If you’re not going to make money then what’s the point of putting a funnel together.

The idea of showing the awards is not to say they are going to make a million dollars but to show what is possible and Facebook is more relaxed about that.

The earlier 46 day series of emails is here: go.thesc.com/emails (password protected – watch the replay or get it live)

Earlier funnels and the new creatives are here: go.thesc.com/funnel (password protected – watch the replay or get it live) 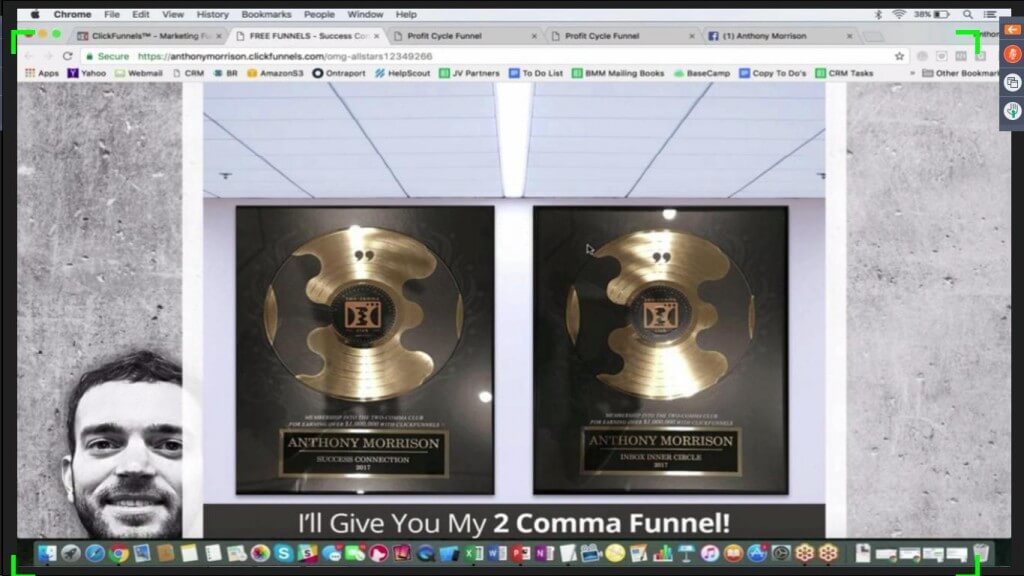 The awards are hanging on an office wall and really stand out. They grab attention so people stop and want to see what they’re all about the two-comma club awards and think maybe I should click this to check it out. 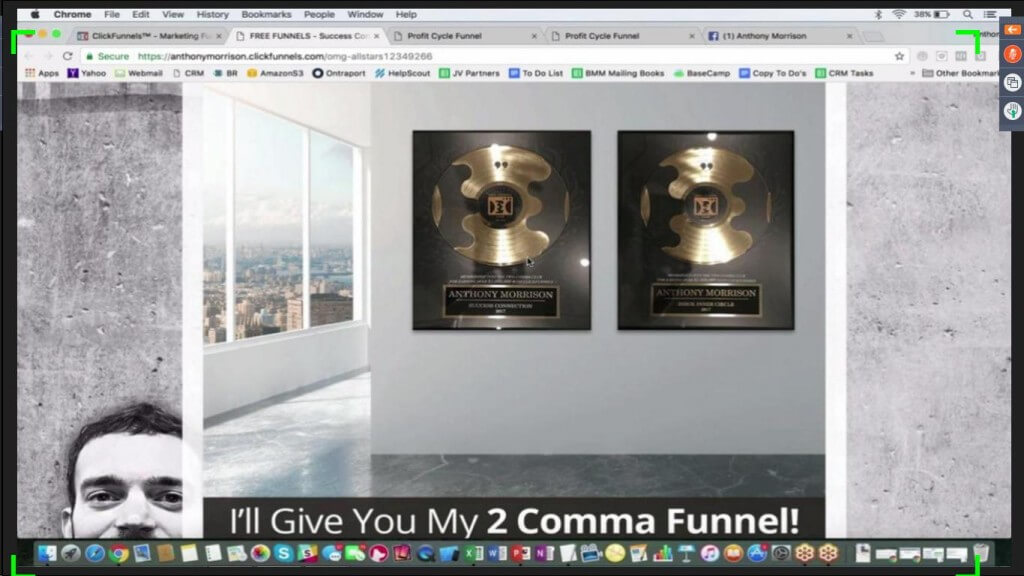 No one is running images like this on Facebook right now so it allows you to stand out and increase click through rates. This allows us to leverage the success Anthony has had by showing off these awards.